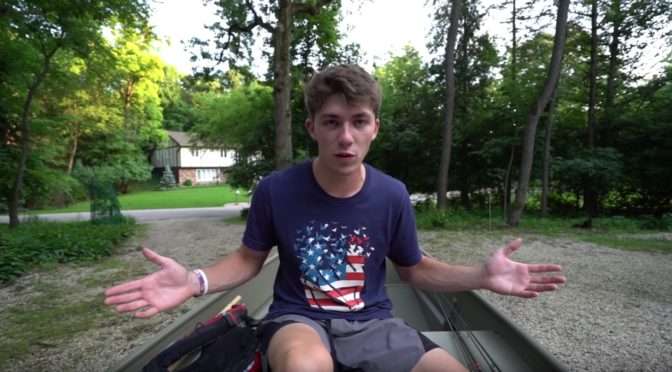 Unless you’ve pretty much never been on YouTube you’ve probably seen one of the Googan Squad fishing videos.

They’re a group of young guys that each have their own majorly popular YouTube fishing channels. A while back they decided to work together to promote themselves and formed their group, the Googan Squad.

Jon B. (formerly “Fishing the Midwest”) is one of the group’s most popular members known for the high quality production and editing in his videos. He currently has over 850,000 subscribers to his channel.

Last week Jon B. released a new video in which he shows off his new Tracker 12 ft. jon boat and explains why he feels an aluminum jon boat is a better option than a big bass boat.

Considering that he’s probably making plenty of money to justify buying a brand new fiberglass boat or that he could probably even get a sponsorship deal on one, I felt like it was a pretty big statement to skip all that and just go with an $800 aluminum jon boat. At least it’s brand new…

If you comb through several years of his videos you can also see that he spent a lot of time fishing out of a Sun Dolphin Pro 120. More recently he was fishing out of his Lowe V-hull boat which he frequently describes as slow.

When he’s not fishing out of one of his own boats he’s usually in fellow Googan Squad members LakeForkGuy and LunkersTV brand new Skeeter boats. The point is Jon B. does a lot of fishing, probably has a lot of options when it comes to boats, and he’s still super excited about his new 12 ft. jon boat.

His goal with this new Jon boat was to keep it simple so that there’s less to transport and the boat stays light enough to drag to the water. This is a methodology I completely agree with as I’ve made sure my Pelican Bass Raider 10e uses all detachable accessories and I’ve held off from adding a deck to keep the weight down.

Although Jon has his boat on a trailer (which you pretty much have to for a 12 ft. boat) he will still be able to drag his boat to the water’s edge if he needs to. Sometimes the best fishing spots are that way because they aren’t accessible without a little sweat.

By keeping his accessories limited to just a transom mount trolling motor and one battery he’s got less baggage to deal with and more time to fish. This is kind of the main theme for small boat fishing as I see it.

Jon also goes on to mention that the low cost and specifically the lack of maintenance is a huge plus for him. Again, I couldn’t agree more.

I personally have never owned a bass boat but from what I hear they seem like absolute money pits. There’s just a lot of moving parts to boats and a lot that can break. Maybe you’ve heard the acronym for BOAT… Break Off Another Thousand.

Compare that to Jon’s new jon boat. It’s a welded piece of aluminum. It floats. What is there to break?

The last big benefit to small boats that Jon explains in his video is the access that he can get on the lake.

Because he’s in a small boat with a flat bottom, he can get way back into cuts and creeks that the bass boats wouldn’t dare get near. And as we just mentioned, there’s no need to worry about scratching the paint job.

To him, this outweighs the speed he might get from a bass boat as where he’s headed there’s no other competition.

A Boat is a Tool

The overall theme of Jon B’s video is that your boat is a tool. It’s a tool that is supposed to help you get to where the fish are.

I agree with that idea 100%. There are a lot of people out there that spend so much time on their boats doing everything BUT fishing. Fixing them up, repairing them, hauling them around… it seems like a distraction from fishing to me.

So if you have the means to buy a bass boat take a minute and consider if the simpler option will allow you to enjoy fishing more.

Minn Kota Wedge2 Weedless Prop (make sure you buy the correct fit for your motor!)